This article, “Changes in confirmed plus borderline cases of congenital hypothyroidism in California as a function of environmental fallout from the Fukushima nuclear meltdown” was published in the Open Journal of Pediatrics, a journal published by Scientific Research Publishing (SCIRP), a publisher included on my list of questionable publishers. 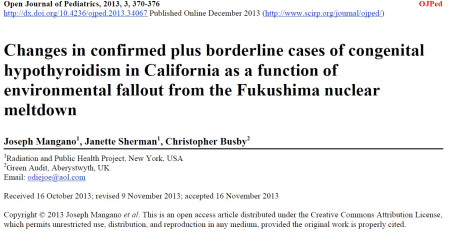 The article reports that fallout from the Fukushima nuclear accident increased the number of confirmed congenital hypothyroidism cases in the population studied.

The article’s findings were reported in the media, including a report on ABC 10 in San Diego and Yahoo! News, among others.

However, some independent researchers are questioning the study’s validity. According to Dr. Yuri Hiranuma:

The actual count of confirmed cases of congenital hypothyroidism (CH) from the California Public Health Department does not match the authors’ count because they disregarded the actual count given to them. Instead, the authors (1) invented their own definition of confirmed cases of CH, (2) misrepresented the real definition of CH, and (3) invented a fictitious diagnostic category of CH which they call “borderline cases. Unfortunately, the study is widely disseminated as the “proof” of the effect of Fukushima fallout on the west coast.

Dr. Hiranuma wrote up her objections to the study and submitted them as a letter to the journal.  However, the journal refused to publish her letter. The letter has since been published on this blog. They sent her this response: Next, Dr. Hiranuma sent an email asking why the letter would not be published, and she got this reply:

I think one reason they won’t publish the letter is they only want to publish revenue articles — they don’t want to publish a letter for free. The following email confirms this: 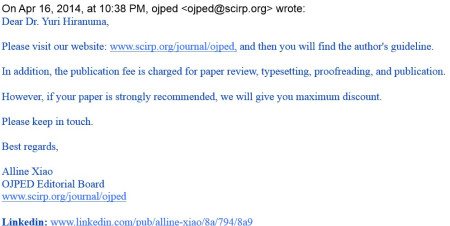 This is a case of several researchers who are concerned about the health effects of radiation exposure using a predatory journal to publish questionable science that bolsters their position on the adverse health effects of low-level radiation exposure. Upon publication of the article, they were successful in getting some media outlets to report their findings, and the findings were seen as legitimate because they were published in a scholarly journal. The journal’s publisher remains faithful to its customers (the paper’s authors, who paid to have their article published) and refuses to retract the article or publish a standard response to it. The academic record remains uncorrected.

This entry was posted on Tuesday, April 29th, 2014 at 9:00 AM and is filed under Scholarly Open-Access Publishers, Unethical Practices. You can follow any responses to this entry through the RSS 2.0 feed. You can leave a response, or trackback from your own site.