The scandal-plagued, Switzerland-based publisher Frontiers has just published a chemtrails conspiracy theory paper by the same author whose earlier article was published and then retracted in an MDPI journal.

In August, 2015, I reported that J. Marvin Herndon had published a conspiracy theory paper in the MDPI journal International Journal of Environmental Research and Public Health. After my blog post was published, MDPI quickly retracted the article. 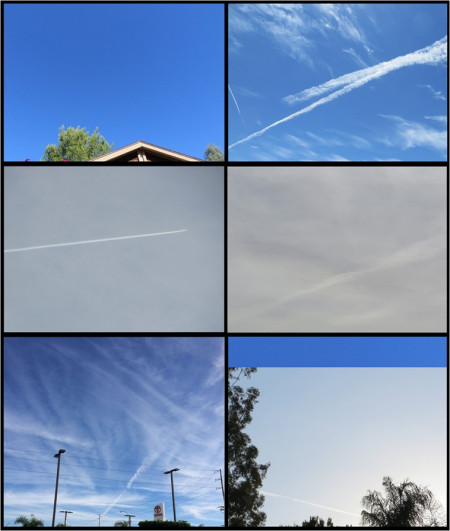 In the new paper, Herndon again theorizes that the government is spraying coal fly-ash into the atmosphere:

In contrast to the presumption of academic geoengineers, covert government/military geoengineering activity has occurred over the past 70 years and has intensified since the end of the Cold War and the discovery of global warming as a national security issue (20).

Later in the article he writes,

The government/military solution to inhibit the fall of rain is to deliberately add an aerosolized pollutant to the region where clouds form to interfere with raindrop nucleation. The intentional addition of particulate pollution not only inhibits the fall of rain but also warms the atmosphere (by absorbing solar energy) and limits loss of heat radiated by Earth. Consequently, the particulate pollution creates an artificial increase in air pressure, which can block the movement of an oncoming weather front thus further keeping the sprayed area from experiencing rainfall (22, 23).

Comments left at the end of the article are beginning to detail the article’s flaws. One says,

This article has a fundamental methodological flaw in that it only compares the composition of rainwater and air particulates to coal fly ash and nothing else. Soil samples should have been used as controls. Also, a statistical analysis is completely missing. The total lack of controls and the lack of statistical analysis renders the article unsound and its conclusions invalid.

The publication of this article is further evidence that Frontiers is little more than a vanity press. The fringe science published in Frontiers journals stigmatizes the honest research submitted and published there.

I suspect that no honest publisher would have accepted this article. That’s why conspiracy theorists such as Herndon go to MDPI and Frontiers when they want to publish something — the acceptance and publication are all but guaranteed, as long as the author fee is paid.

Frontiers’ peer review process is flawed. It is stacked in favor of accepting as many papers as possible in order to generate more revenue for the company. Frontiers is included on my list, and I recommend against publishing in its journals, which are rather expensive to publish in anyway.

Appendix:  Additional criticism of Herndon’s article is posted in the blog Metabunk (scroll down to the 2016 comments).