I was a graduate student when e-mail became widely available as a form of communication and the world wide web was getting going in the early 1990s. Scholars and researchers largely welcomed the advent of the internet and e-mail greatly facilitated communication and collaboration.

More than 2 decades later e-mail and the web are dominating academic life and it is hard to imagine how we managed without them. However, e-mail and web-based administration are starting to take over the lives of many academics and researchers. I dread the prospect of reading my e-mails first thing in the morning. I receive dozens of e-mail messages from Predatory Open Access Publishers, which annoy, frustrate and demoralize me on a daily basis. My university’s e-mail system has a reasonably good spam filter but many e-mails still make it through to my inbox. I then end up spending valuable time sorting the genuine invitations to submit papers and attend conferences from those sent by Predatory Open Access Publishers. I started to collect some of the annoying e-mails because Jeffrey Beall the author of this blog invited me to contribute a short article.

The thing that annoys me most is the dishonesty of the people that run the Predatory Open Access Publishers. My name is Ali Mobasheri and I am proud of my name and my ethnic background. I don’t pretend that my name is “Fred” or “Gary” or “Carson”. E-mails from Predatory Open Access Publishers come from individuals from India and Pakistan and Nigeria. These people are clearly not named “Fred” or “Gary” or “Carson” but they use these names in combination with the most idiotic surnames that you can possibly imagine.

Here are a few classic examples: Michael Smith, Valentina Diaz, Joseph Henry, Rod Emani, “Issac”, “Lincy”, “Rosalin”, “Joseph” and “Sharan” (all pretending to be from Los Angeles), Joseph G Marreddy (pretending to be from Nevada), “Myna” (with no surname, pretending to be from New York), Nilton C Vasile, Carson Willis, Tim Williams, James Victor, Ronald M. Flower, P. Mondal, Enudi John and M. Basu (all of unknown origin). It is the dishonesty that annoys and frustrates me most. Why don’t these people use their real names? What’s wrong with their real names? Do they really think that the rest of the world is so xenophobic?

The other annoying aspect of my daily work life is the e-mails that come from China. I have to be very careful because my own university has a campus in China and we have good relations with our Chinese colleagues. However, the fact remains that a number of travel agencies in China are turning into conference organizers are operating under the name of “BIT Conferences” and luring unsuspecting academics to fake conferences in China.

A similar approach is taken by the dreaded OMICS group, the most aggressive of these Internet pirates with their characteristically annoying “Greetings from OMICS Group!” salutation.

I have contacted the IT department of my university to see if the e-mails sent by these organisations can be blocked and I am waiting for their reply. I suspect that this will be very difficult because of the way these shadowy organisations change their domain names and use multiple e-mail addresses.  Therefore, for the foreseeable future, it looks like my frustrations are set to continue until the academic community comes up with a strategy to deal with this invasion of our most valued form of communication. 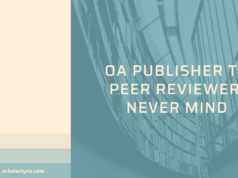 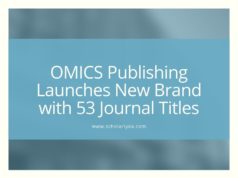 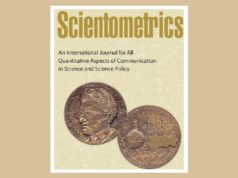 Is the Editor of the Springer Journal Scientometrics indifferent to plagiarism?